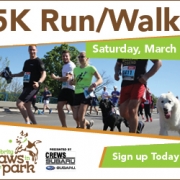 Come join thousands of people and their “best friends” at Riverfront Park (1061 Everglades Avenue, North Charleston, SC 29405) on Saturday, March 19, 2022 for Celebrity Paws in the Park presented by Crews Subaru!  People can participate in a competitive 5K race or a leisurely fun run and walk with their dog.  Then, families are invited to sit, stay and play all day in six activity zones throughout the park, including dog adoptions, Dock Dogs® diving competitions and health and wellness services for pets.  Participants can sign-up now at Paws.CharlestonAnimalSociety.org .

The brand-new Celebrity Paws in the Park presented by Crews Subaru will be the most important education and fundraising event of the season for Charleston Animal Society. EVENT PHOTO LINK HERE.

MORE THAN JUST A RUN!

Celebrity Paws in the Park is hosting the world famous “Dock Dogs®” dog diving competitions in the event’s Canine Sports Arena.  Even non-professional canine athletes will be able to enjoy this once in a lifetime experience!

There will also be special stage shows with “Travis & Friends” that will teach kids how to be their best selves around dogs.  Animal Planet star, celebrity dog trainer and winner of the hit reality show “Greatest American Dog,” Travis Brorsen, will be live on stage for these fun-filled educational segments.

“When Charleston Animal Society asked me to be a part of its inaugural Celebrity Paws in the Park, I could not resist,” said Brorsen.  Travis built his career on sharing what he has learned about creating a positive learning environment for dogs and building relationships between them and their families based on friendship, kindness, and compassion.  “We’re taking expertise from my show ‘My Big Fat Pet Makeover’ to create an exciting Couch to 5K Training Program where people working with their dogs can get fit together with the goal of participating in the 5K fun run or walk on March 19th,” Brorsen said.

In addition, there will be a Pet Adoption Zone, Health & Wellness Zone, and the Canine Sports Arena. Celebrity Paws in the Park will feature a full day of family-friendly programming that includes live obedience and working dog demonstrations.

“As an integral part of our Subaru Love Promise to our community, we believe that people and pets are better together,” said Ken French, Marketing Guy for Crews Subaru. “As the 2021 Subaru Retailer of the Year, Crews supports many programs that benefit children, and Celebrity Paws in the Park brings our passions together.  We are honored to be the Presenting Sponsor, not only in the inaugural year but for the next three years as Subaru Loves Pets!!”

SIGNING UP IS EASY

Anyone who wants to participate in the competitive 5K or the fun run or walk can sign up at Paws.CharlestonAnimalSociety.org. Friends of Charleston Animal Society are encouraged to create a fundraising team or fundraise as an individual. Competitors in both the 5K race and the fun run will win prizes based on their times and organized team themes. Fundraising teams and individuals will earn prizes based on the amount of funds raised. All money raised will go to lifesaving care to thousands of animals each year at Charleston Animal Society.

There are opportunities for additional businesses to become involved in Celebrity Paws in the Park.  You can find information about becoming a sponsor at Paws.CharlestonAnimalSociety.org or by contacting Erin Nosker, Director of Business Partnerships and Events by email at enosker@charlestonanimalsociety.org or by phone at (843) 329-1541. EVENT PHOTO LINK HERE.

Want to join the discussion?
Feel free to contribute!

WORLD’S BEST CAT LITTER TO “GIVE A CRAP” FOR HOMELESS ANI...

Celebrity Paws in the Park VIP Experience
Scroll to top