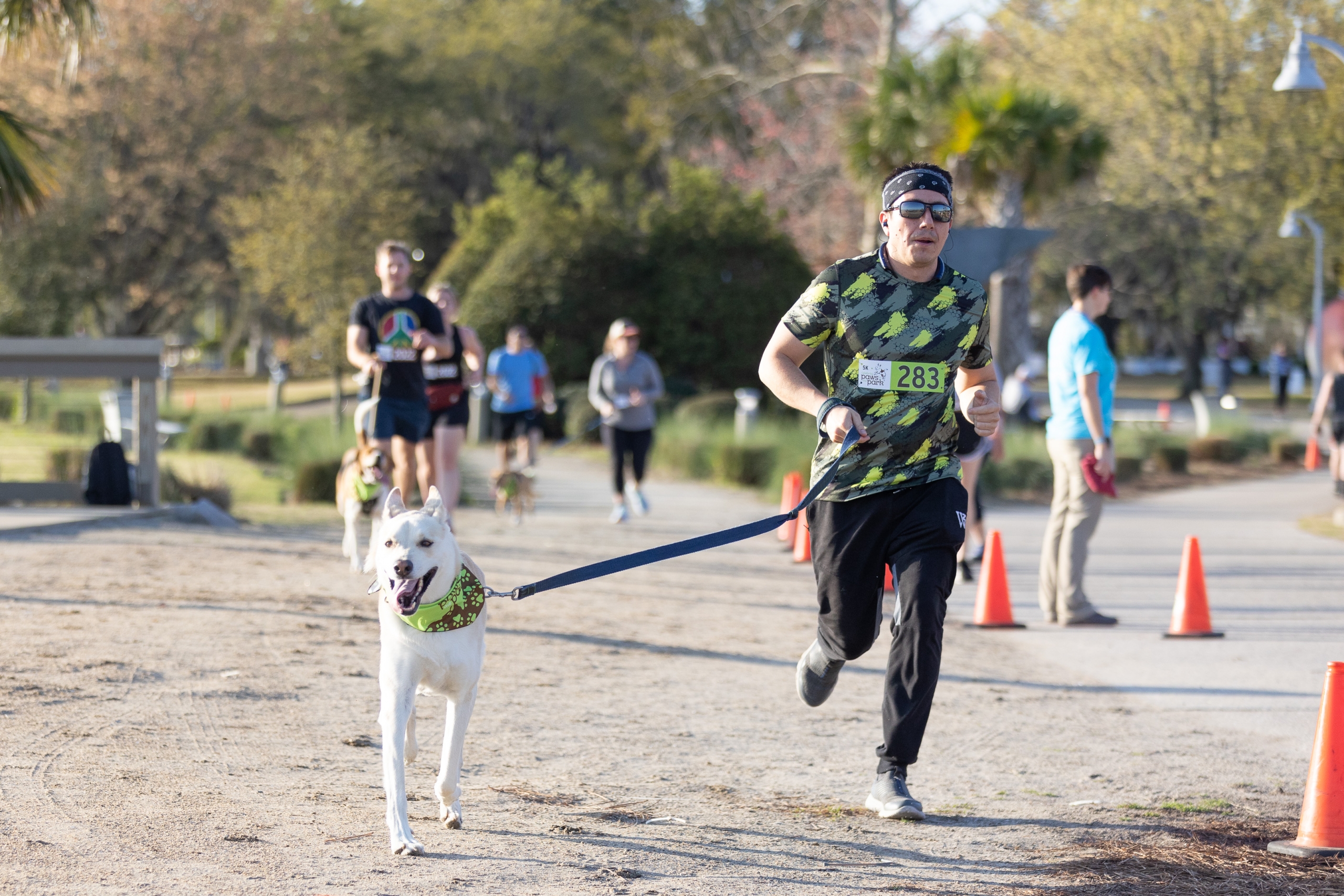 Charleston, SC – They ran, walked, jumped, and swam!  Over 2,500 people and their pets turned out to raise funds and awareness for Charleston Animal Society this past weekend, Saturday, March 19, 2022, at Riverfront Park for Celebrity Paws in the Park presented by Crews Subaru.  The event raised a gross total of $489,000 with cash and in-kind donations to support the lifesaving work of Charleston Animal Society.  Upwards of 20,000 animals will turn to the organization for caring, compassion and hope this year alone.

A total of 497 runners and walkers participated in the 5K “Race for the Rescues” – made possible by the Rachael Ray Foundation – or a leisurely “5 K-9” fun run with their dogs – sponsored by Joye Law Firm – to kick-off the beautiful day.  City of North Charleston Mayor Keith Summey, the Honorary Chair for Celebrity Paws in the Park, was on hand with Joe Elmore, CFRE, CAWA, President and CEO of Charleston Animal Society, with a remembrance of why the crowd had gathered, by ringing a bell to memorialize the 332 animal victims of cruelty and violence so far this year.

Thanks to Petco Love, 229 dogs and cats received over 400 free vaccinations at Celebrity Paws in the Park.  Pet microchip company 24 PetWatch provided free chip scanning and microchip insertions for pets at the event.

“When Charleston Animal Society asked me to be a part of its Celebrity Paws in the Park, I could not resist,” said Brorsen.  Travis built his career on sharing what he has learned about creating a positive learning environment for dogs and building relationships between them and their families

based on friendship, kindness, and compassion.  “We took expertise from my show ‘My Big Fat Pet

Makeover’ to create an exciting Couch to 5K Training Program, sponsored by Roper St. Francis Healthcare where people worked with their dogs to get fit together with the goal of participating in the 5K fun run or walk,” Brorsen said.

An unbelievable 39,328 people were reached with the “Couch to 5K Training Program” video content between January 1st and March 19th.

Even those not attending Celebrity Paws in the Park had the opportunity to help raise needed funds for the Animal Society.  Thanks to our generous sponsor Boehringer Ingelheim Animal Health USA Inc., the maker of NexGard® (afoxolaner) and HEARTGARD® Plus (ivermectin/pyrantel), donated to Charleston Animal Society for each level achieved on the WoofTrax app just by walking a dog at home. A record 866 people signed up for the “Step Up for Shelters Challenge” resulting in 28,383 walks for 30,998 miles between February 14th and March 19th.

To make sure that cats were part of the excitement, World’s Best Cat Litter stepped up to donate $5 to Charleston Animal Society for every picture of a pet cat that was posted to a family’s personal Facebook page or Instagram account with the hash tag #GiveACrap until the donation totaled $5,000.

A special thanks goes out to our media partners for helping to publicize Celebrity Paws in the Park: Live 5 News, Charleston Radio Group and the Charleston City Paper.  Important recognition to Tito’s “Vodka for Dog People,” Delaney Oyster House and Blackbaud for hosting the VIP Experience Friday night and all-day Saturday.