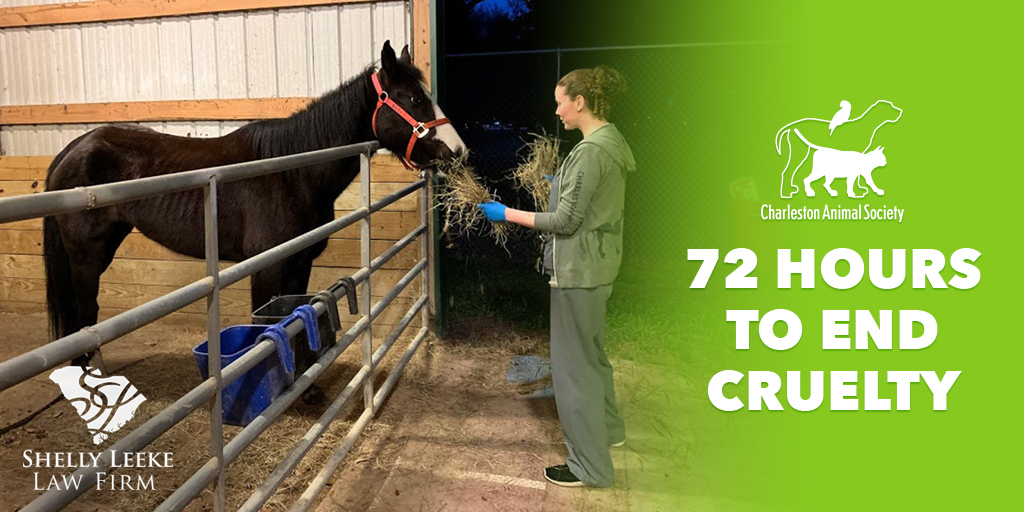 Attorney Shelly Leeke matching all gifts to Charleston Animal Society up to $10,000!

In the past three months more than 20 animal victims of cruelty have come through the doors of Charleston Animal Society. “We are looking at a problem of overwhelming proportions, and all of us need to work together to stop it,” said Charleston Animal Society President and CEO Joe Elmore, CFRE, CAWA. “Too many broken souls continue to need our help.”

The latest victim is “Lana,” a 10-year-old dog brought in March 9th after being beaten and severely cut. Lana’s wounds, including head injuries, were so severe she needed ongoing emergency treatment from Charleston Animal Society’s veterinarian team. Law Enforcement is investigating the case.

Since December, victims of animal abuse have included:

To fight back, Charleston Animal Society is holding a 72-Hour Campaign to End Cruelty Thursday through Saturday. Attorney Shelly Leeke has stepped forward to match every donation up to $10,000. “Just last year, I adopted my dog Ethel from Charleston Animal Society, after she was rescued as part of a large hoarding case,” Leeke said. “Together, we can continue the fight to end animal cruelty. Please give!”

Donate and have your gift doubled at CharlestonAnimalSociety.org/donate

Research has shown that animal abuse often leads to human violence. “If someone is hurting an animal, there’s a good chance they’re hurting a human,” said Charleston Animal Society Vice President of Operations and Strategy Aldwin Roman, CAWA. “That’s why it’s so important that we do everything possible to stop animal cruelty.”

Determined Daisy: Healing After Being Hit By a Car
Scroll to top