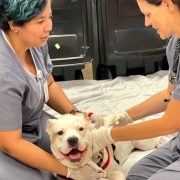 $1,000 Reward for Information on Dog Rescued with Embedded Chain

A three-year-old dog is recovering at Charleston Animal Society after he was discovered with a choke collar embedded at least an inch into his neck. The lifesaving veterinarian team at the shelter took emergency action when Rocky was brought in June 23rd. “We immediately had to shave around the wound so we could then cut the collar out,” said Chief Veterinary Officer Lucy Fuller, DVM. “Embedded collars are very dangerous because they threaten so many vital areas in the neck.”

Charleston Animal Society is offering a $1,000 reward for information leading to the arrest and felony conviction of the person responsible for the actions that led to Rocky’s injury. He was found by a North Charleston Animal Control officer after a concerned citizen called in. He was running loose in an industrial area near Riverfront Park.

“This collar was so embedded that it took at least weeks, if not months for it to go this deep,” said Fuller. “Rocky was likely tied up and constantly pulling on the chain, which then caused the collar to cut through the neck.” His owner hasn’t come to the shelter to try and find him.

Rocky was given pain medications and antibiotics and his wound was initially treated with honey, to help clean the injury. His bandages are changed daily and he has been extremely friendly to staff.

“None of this treatment would be possible if it weren’t for the care, compassion and generosity of our donors and supporters who give to Caitlyn’s Anti-Cruelty Fund,” said Charleston Animal Society Vice President of Operations and Strategy Aldwin Roman, CAWA. “Thanks to people like you, we remain committed to fighting cruelty wherever it exists.” You can help us fight cruelty at CharlestonAnimalSociety.org/Cruelty