January 10, 2023 | Columbia, SC
More than 40 state and national animal welfare organizations are gathering in Columbia for the first-ever No Kill South Carolina 2024 (NKSC 2024) State Summit.  The “Sprint to the Finish” theme will focus on finding every healthy, treatable and adoptable animal a home, with the goal of making the Palmetto State the first No Kill State across the southern U.S., from Atlantic to Pacific, and across America’s Heartland.
“This goal began as a dream in 2016, funded by Petco Love, and while we are so close to making this achievement a reality, there are still hurdles to clear,” said No Kill South Carolina Chief Project Officer Abigail Appleton, PMP, CAWA. “We will discuss the state of animal sheltering, and problem solve remaining lifesaving obstacles, in light of new challenges such as a national veterinarian shortage, a difficult labor market and a rollercoaster economy.”
The Summit will be held Wednesday, January 11, 2023 from 9am – 3pm at the Cooperative Conference Center, 169. Laurelhurst Avenue, Columbia, SC 29210.  CLICK HERE TO SEE AGENDA.
The statewide summit will host 80 in-person attendees, who together, will formulate a plan to reach the finish line and achieve No Kill South Carolina. “There is no such thing as a ‘no kill shelter,’ only no kill communities,” Appleton said. “Becoming no kill means saving every healthy and treatable animal — a euthanasia rate of about 10% or less.”
A dozen national organizations will participate at the summit, including Petco Love, the ASPCA, the Humane Society of the United States, Best Friends Animal Society and Petsmart Charities to name just a few. NKSC 2024 is a statewide initiative of Charleston Animal Society, South Carolina’s first animal organization and one of the oldest in the country.
DATA SHOWS SOUTH CAROLINA APPROACHING GOAL
NKSC 2024 made data collection a top priority from the start. The charts below show the progress that has been made by tracking data from open-admission shelters (those most challenged with euthanasia). In 2016, few communities were at the No Kill goal (shown in green), but that number has gone up dramatically since 2016, due to improved strategies, communications and statewide teamwork.

“Achieving the NKSC 2024 goal is an uphill battle in a state where shelters are underfunded, where we have no statewide regulations of animal shelters, no state-required training of Animal Control Officers and no required data reporting for all animal shelters,” said President and CEO of Charleston Animal Society Joe Elmore, CAWA, CFRE. “But we know that if South Carolina can do it, any state can do it, that’s why so many people around the country are cheering this effort on.” 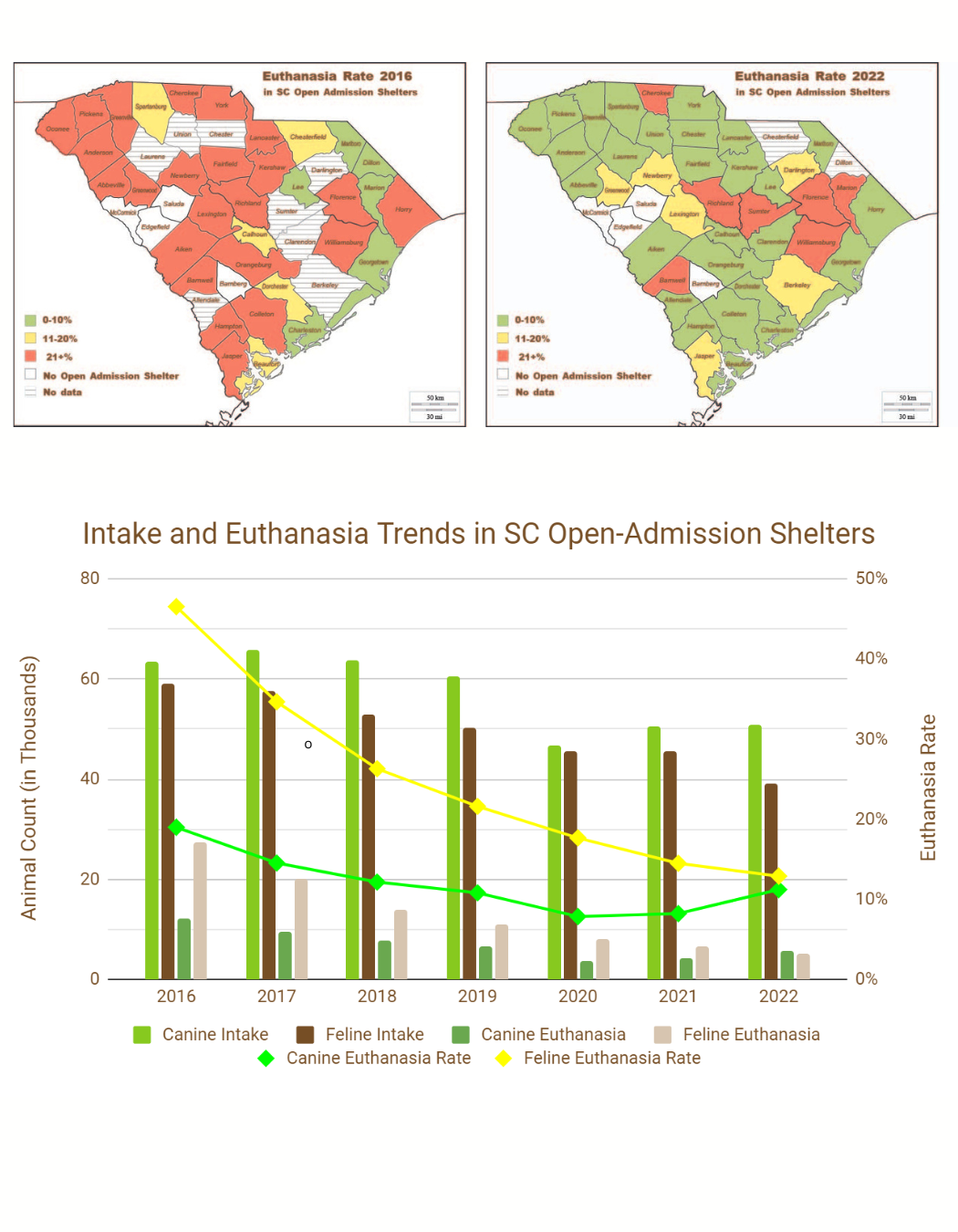