This post is written by Jeanne Taylor with jtpetpics.com, our volunteer photographer who takes amazing photos of our adoptable animals for us every week!

I first met this meatball named Tyson in July when he was new to Charleston Animal Society. Now, more than 90 days later, he is our longest-running canine resident.

I’m not going to try to sell you on Tyson– but I am going to give you the truth as I know it. The first truth? He needs to get out of the shelter and into a loving home.

In July, he had just come in and had some skin sensitivities. He was painful then, you could tell. He even squinted in his photos so I know he was uncomfortable. But since then he has received the care and nutrition he needed to “get right” and he looks GREAT! His fur is a shiny bright white and it’s super soft! What was patchy in July has now filled in and he’s so handsome

He’s a big guy, there is no getting around that right now, but he doesn’t HAVE to be. At about 80 pounds of torque, Tyson needs someone who can help him get fit. Anyone committed to a regular walking program or wanting a transformation project companion? Tyson may just be your guy!

Because he has been kenneled for four months with limited exercise opportunities, he’s gained some weight (I mean, who hasn’t in 2020?). Couple that with having just finished heartworm treatment and having to stay quiet for 30 days – well, let’s just say he could use an exercise buddy.

But speaking of buddies, here’s the rub.

Tyson is dog-selective and spending the last four months in a noisy kennel environment hasn’t made him more inclined to have dog friends. He did have a dog friend, a female, but he is dog selective so his ideal home would be one where he could be the only dog – the only pet actually.

The cute side of being cooped up (although well cared for) is that he has formed a bond with his toys – he LOVES his toys! And it’s adorable. It could be a ball or a stuffed animal. He doesn’t discriminate. He loves them all. I get it – “only pet” can be a tough proposition. But I have been that person with a dog who wanted to be an only pet – and it was FINE – we had a long and beautiful life together!

Because of his sheer size, strength and the decompression time he will likely need after four months in a kennel, he really should be welcomed into a home without smaller children. He could easily knock them over with an accidental hip check!
But did I mention he’s adorable?

He has a staff friend who takes him on field trips to try to help with his kennel boredom/fatigue, but the best remedy will be to get him into an adoptive home or a foster situation where he can unwind and start the path to becoming a well-mannered gentleman.

He’s a walking contradiction, this guy. He loves to play but he’s super lazy. If given the chance to lay down, HE WILL. He likes fuzzy rugs and soft comfortable things. He’s about six years old so he has quite a few good years left for snuggling!
I KNOW there is a great home out there for him and I ask you to please share his post so we can find it. LOADS of photos in the comments. Please contact me with any questions: (843) 329.1567. 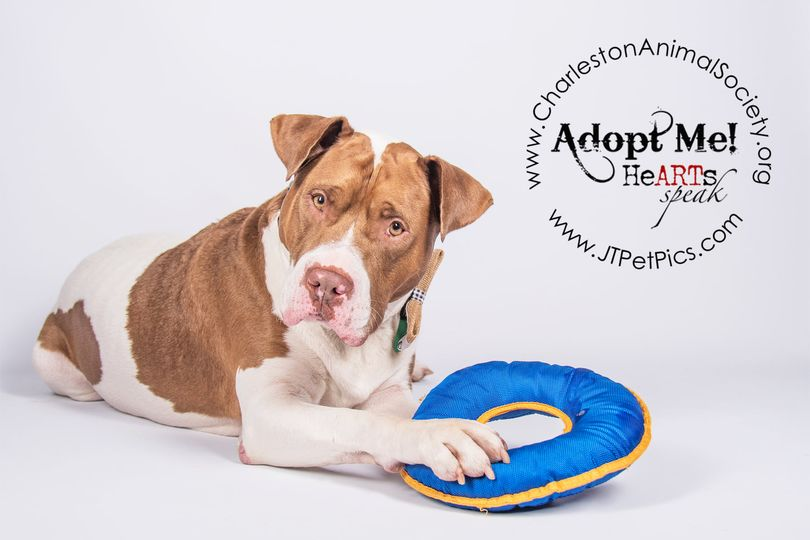